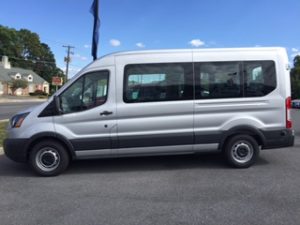 As a direct result of the generous grant from the First Federal Charitable Foundation, Family Promise of Carbon County was able to replace their 1999 van with a 2016 Ford T350 Transit van. The van will be used to transport homeless families back and forth from the Family Promise day center to the designated sleeping location.

The Family Promise fundraising team described some of the maintenance and mechanical problems associated with using their old van in their grant request. The team was particularly concerned about roadside breakdowns that would leave young children, babies and families in the cold during the winter months.

Family Promise representatives also met with Megan Kennedy, Executive Director of the First Federal Charitable Foundation, to further explain the dire need for a van. “We wanted Megan to understand the success of the program and how our model of traveling to a new host site each week successfully puts homeless families in contact with a wide array of volunteers,” explains Family Promise President Tina Dowd. “We convinced her that reliable transportation is absolutely critical to the success of the program.”

The Family Promise Board was pleasantly surprised when the Foundation suggested a brand new van that would be covered under a warranty.

“We want to extend our deepest appreciation to the board members at First Federal Charitable Foundation for their generous grant along with our assurance that their investment will enable homeless families to interact and network with volunteers from many congregations and backgrounds. This network of support is really the strength of the homeless shelter program,” said Family Promise Executive Director, Natalie Bojko. “We also want to thank John Drury for giving us our FIRST van. John believed in our mission long before we had a 5-year track record or audited financials,” expressed Tina Dowd. The green Mauch Chunk Museum van was a blessing to the start-up organization and now the Silver Ford Transit van will fill that need.